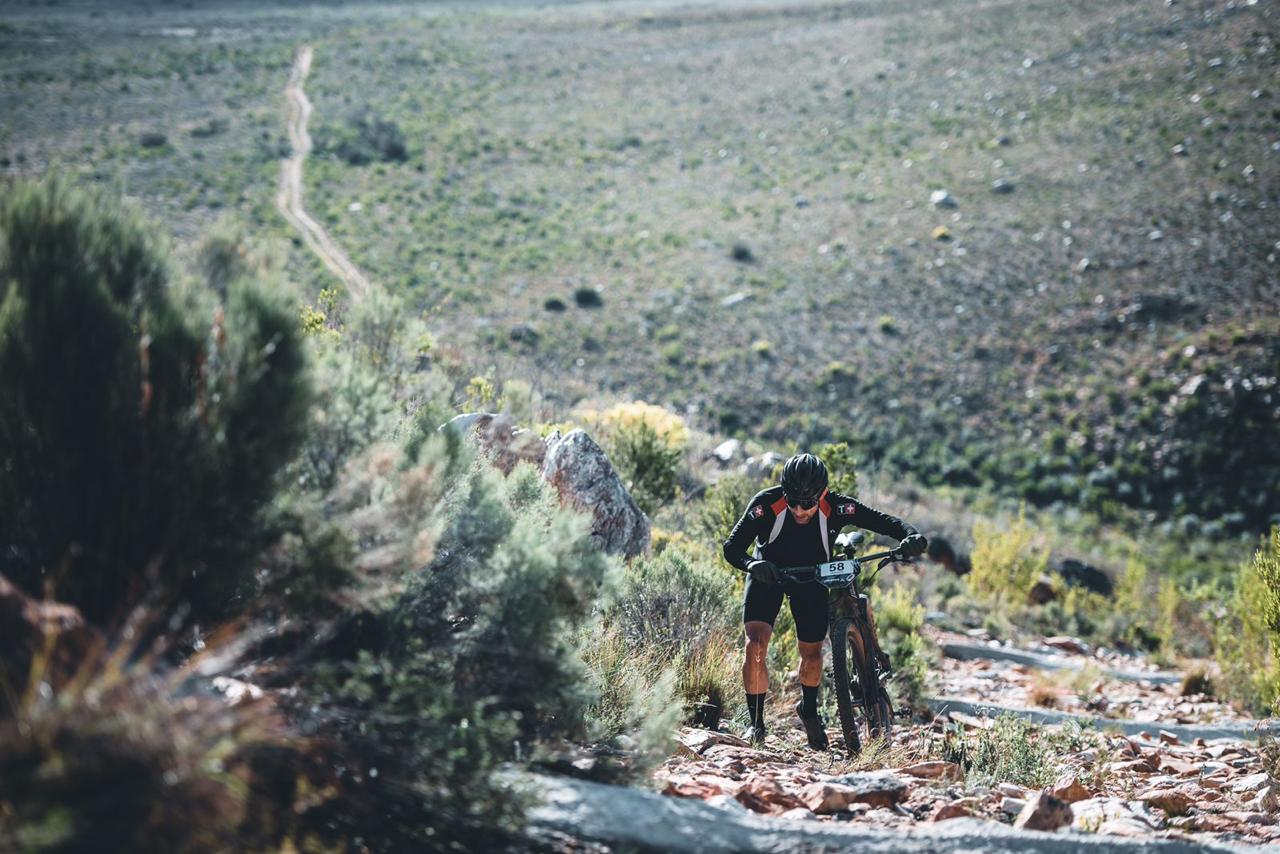 South African marathon champion, Yolande de Villiers (The Coopetto) took a comfortable victory in the women’s race finishing an impressive 30th overall. It was a day that saw a limited field of riders due to Covid-19 restrictions tackling the 121km race from Oudtshoorn to Groot Brak River in near perfect weather conditions. 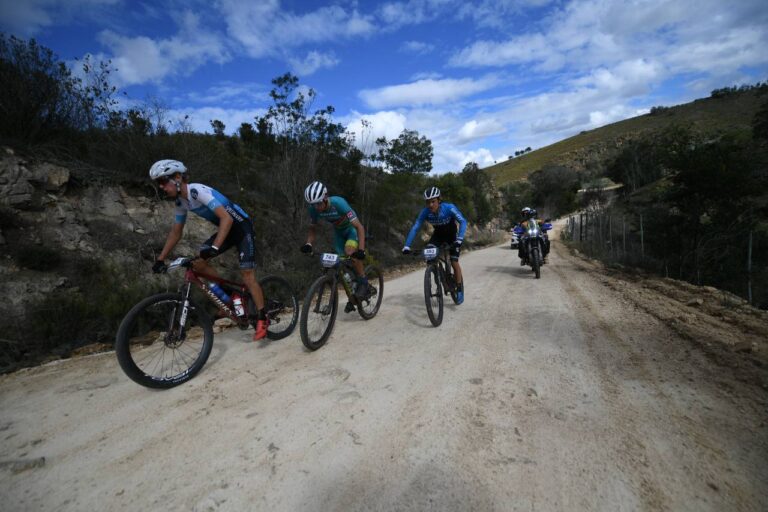 Botha, who finished third at the 2020 edition, was eager to improve on that result and was attentive throughout the demanding race, which included 2900 metres of climbing. The 22-year-old professional racer from Pretoria, outlasted most of the field and eventually outsprinted his final two rivals to claim the win in a time of 04 hours 46 minutes 22 seconds. Second place went to Nambia’s Alex Miller (Trek Vaude) and third to South African Marco Joubert (Imbuko Giant), both also beating the previous record.

Botha’s winning time was 01:34 quicker than the previous record of 4:47:56 set by Swiss ace Urs Huber in 2014. But the course for the 2021 edition was around 1500 metres longer as the organisers needed to create a detour near the finish because of damage to the route caused by recent rain. 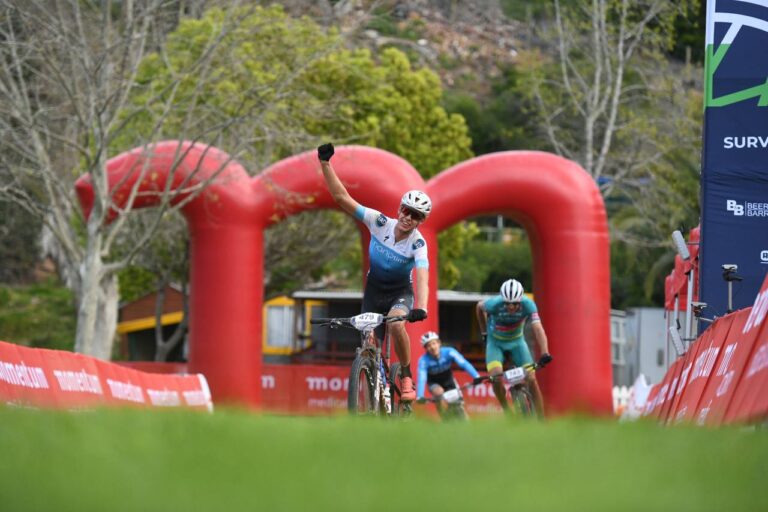 Wessel Botha celebrates as he crosses the finish line ahead of Alex Miller and Marco Joubert at the 2021 Momentum Medical Scheme Attakwas Extreme, presented by Biogen.| Photo: ZC Marketing Consulting

As is usually the case, the rugged terrain and steep gradients of the section through the Attakwas Reserve after Water Point 2 was the most decisive. Pieter du Toit (Pyga EuroSteel) claimed the King of the Mountain prize at the 56km point, but he punctured on the descent. That left a group of five in the lead comprising two-time winner and pre-race favourite, Matthys Beukes (Pyga EuroSteel), Tristan Nortje (Imbuko Giant), Miller, Joubert and Botha.

Beukes then also punctured on the descent putting paid to his hopes of contesting the win and Nortje was distanced on the climb with 87km completed, leaving Miller, Joubert and Botha to tackle the finale at the front. 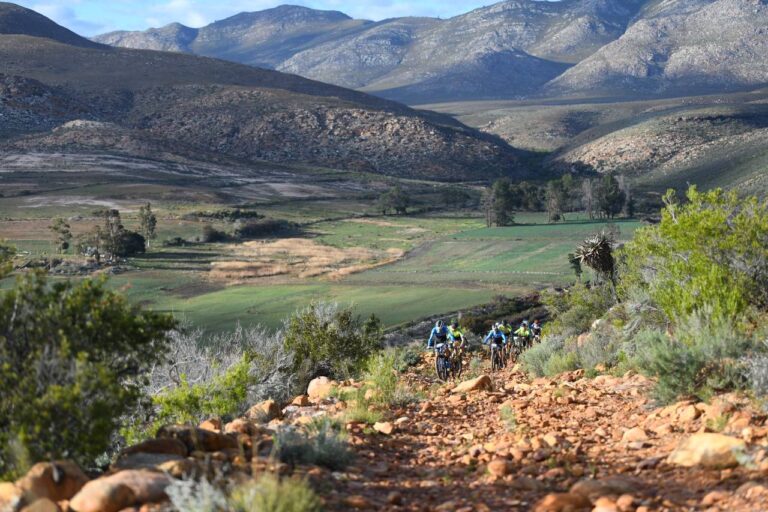 “Initially Alex tried some attacks but he couldn’t drop us so we decided to work together and ensure we kept our lead,” explained Botha. “We worked well together but I knew from last year that those last two climbs were crucial. I attacked on the second one and Marco got dropped. But he managed to claw his way back to us and I then realised that it would come down to a sprint and I knew the first rider onto the last descent would be in the best position for the win.

“Alex managed to get in front on the last downhill, but he went a bit wide on a turn and I managed to pass him on the inside. From there it’s quite twisty and narrow to the finish and so I just kept the pressure on and was able to cross the finish line first,” explained an elated Botha. 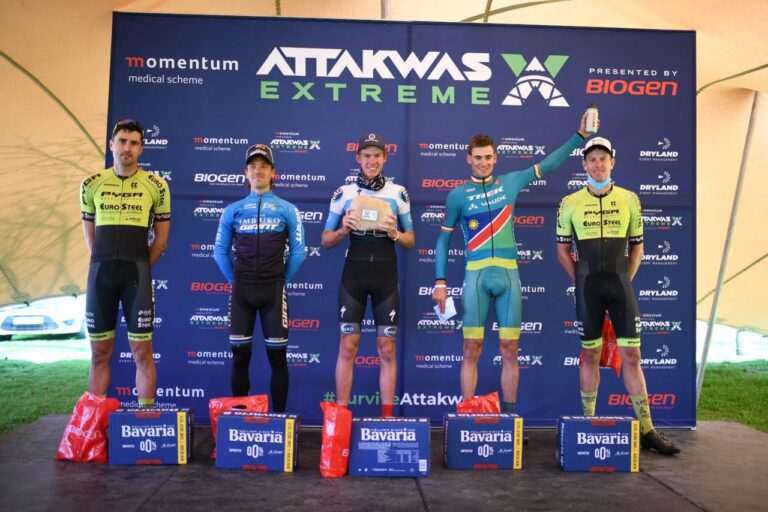 “This is definitely one of the highlights of my career,” smiled Botha. “Attakwas is the toughest one-day race in South Africa and riders have a lot of respect for it. To win it for my team and to break the course record is something I’m very proud of. With about 30km to go I noticed our time and thought that we would be close to the record, but I was more concerned about trying for the win. The weather conditions were really perfect, which definitely helped with the fast time.” 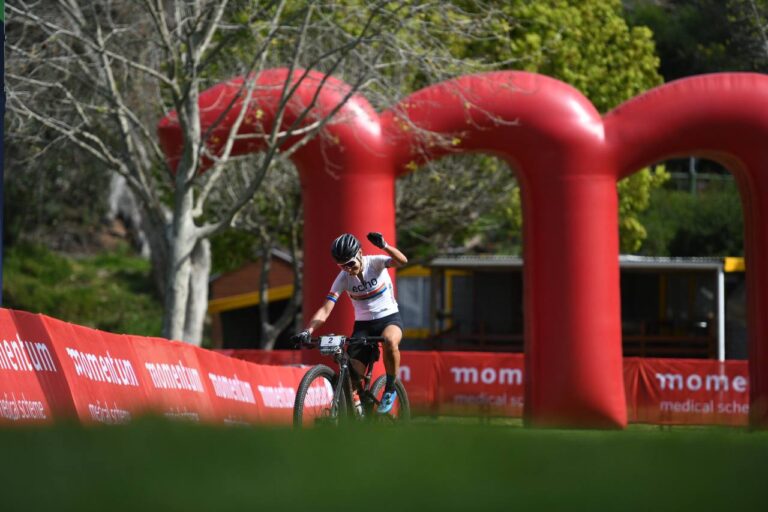 Unlike the men’s race, the women’s race saw De Villiers lead from start to finish. It was the 48-year-old’s ninth participation in the iconic race and her third victory. She claimed her first win in the first edition of the race in 2007. Her second win came from thrilling a sprint finish at the 2019 edition and her third a somewhat ‘social distanced’ one in 2021.

“I attacked from the start and was on my own at the front for the whole race. My strategy was to race my own race and basically ‘go til you blow’!” said a satisfied De Villiers. 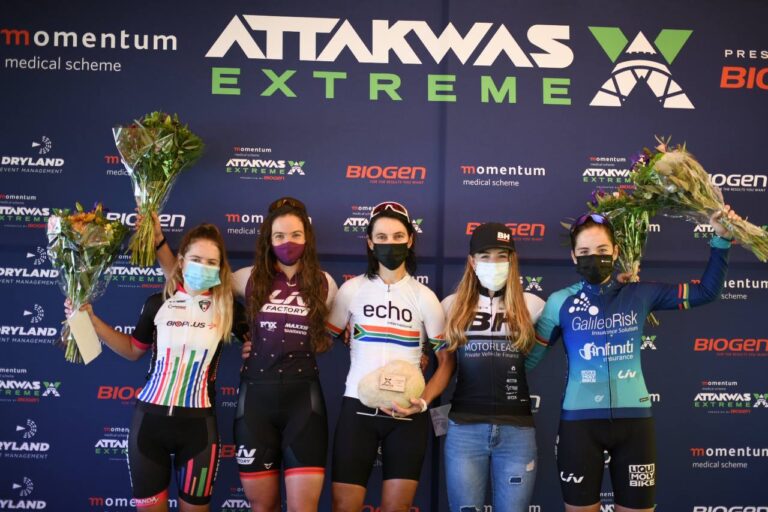 “This was a special victory for me because I lost my previous sponsor at the end of July as a result of the lockdown restrictions due to Covid-19. And today I raced for the first time for my new sponsor, The Coopetto, which is a cycling coaching company owned by my coach, Timo Cooper.”

The first ten finishers at the Attakwas Extreme get gold medals and all finishers under six hours get silver medals with bronze medals going to the remainder of the finishers. This year there were only 30 riders that broke the six-hour silver-medal cut-off.

Defending Champions Face Stern Test at 2022 Hell of the South

The Momentum Medical Scheme Attakwas Extreme, presented by Biogen, is set to take place on…