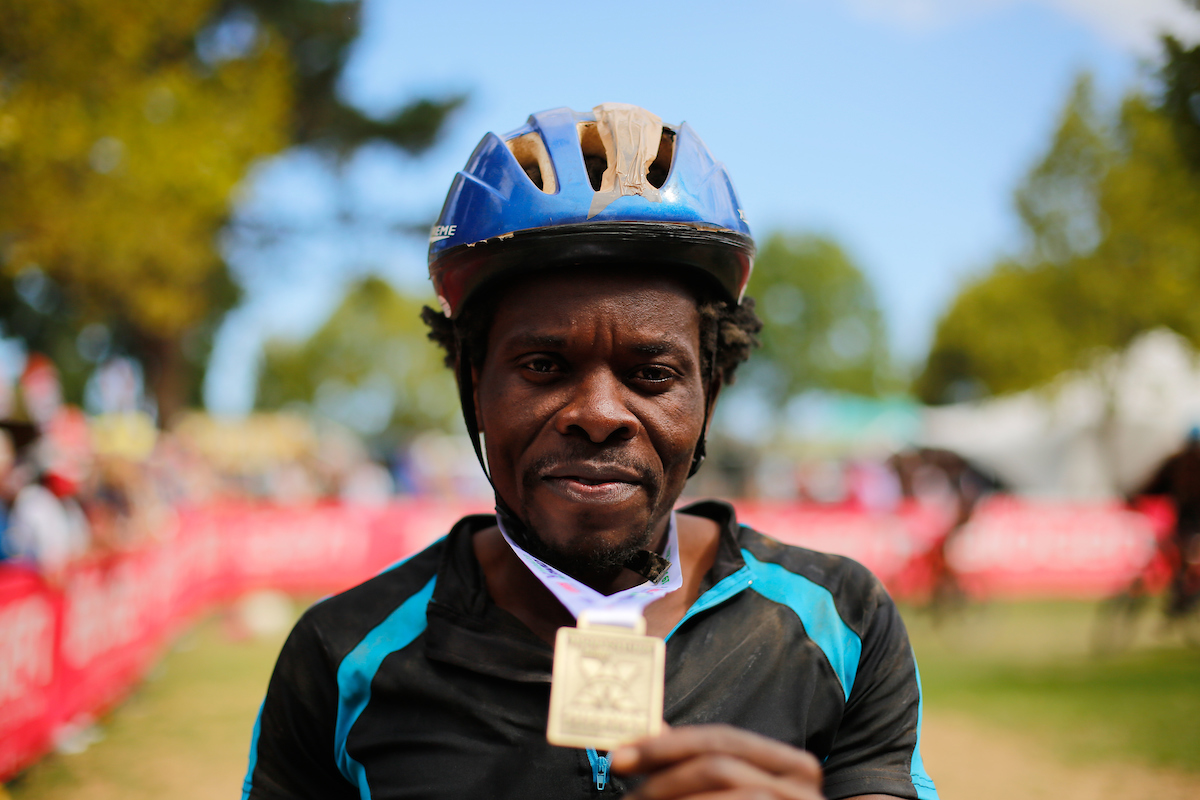 Western Cape, South Africa – Patrick Liwonde, a gardener from Freimersheim, worked harder to get to his favourite race than he had worked to complete it. His dream had always been to compete in the Momentum Health Attakwas Extreme presented by Biogen and 2019 was the year he finally he did it.

For years Liwonde had watched as the world’s top riders came speeding past the informal settlement where he lives. As a gardener, he had used a bicycle as his main form of transport and over the years developed into a strong cyclist.

With the help of his good friend John Cable, Liwonde arrived at the start line of South Africa’s toughest one-day mountain bike race with a helmet that had been duct-taped, All Star shoes and a single-speed bicycle.

Determined to rise above his circumstances, he finished the unforgiving 121km route in an incredible time of 8:14:42.

“I’ve witnessed a piece of this race for a long time, and it has always been my dream to someday enter it. I finally finished it! And I didn’t depend on any fancy equipment to do it. I’m telling you, if I have the right bicycle, I’ll be able to do this race in six hours!” said Liwonde.

Fast forward to 2020, and Liwonde will return to the Attakwas Extreme. After his story captured the hearts of many South Africans last year, Liwonde will now ride with a brand-new bicycle and all the kit he needs.

The event has not only changed Liwonde’s life, but has served as an inspiration to many in the area to take up the sport of cycling. Another rider that has signed up to ‘survive Attakwas’ this year is farm worker Jarlow Mongo.

Mongo has worked at the local Louvain Guest Farm since he left school and is now one of the main employees that helps run the highly successful business. While he has always had an interest in cycling, he has never been able to fully pursue the sport due to the high costs involved in mountain biking.

With the support of fellow Louvain employee Micheal Wood and Louvain owner Hein Jonker, who are both avid cyclists, in 2019 Mongo received his first bicycle.

Both Wood and Jonker decided to enter the Attakwas this year, and it didn’t take long before they convinced Mongo to do the same. Dryland Event Management were soon informed about Mongo’s story and extended their support to the aspiring cyclist with a complimentary entry to the event.

“This is a dream come true! One half of me is looking forward to event, and the other half is scared after watching a few YouTube videos about how tough this race is! This is the second race I have ever entered, and will by far be the hardest and furthest one I’ve done! It’s an honour to be doing this and I am grateful that I will be getting a chance to be an example to others. I know this will be tough, but I will have the biggest smile when I cross the finish line!” said Mongo.